P-F Curve: What it is and how to use it in maintenance

Raise your hand if this has happened to you: You brought your car in for maintenance right on schedule, and then something completely different caused a breakdown a week later. At the time, you may have taken it to mean that your car mechanic was a hack. But the more likely reason is that your car was a victim of the random and unpredictable failure that often plagues machines.

Recently, we considered reliability-centered maintenance (RCM) as one of four common maintenance types. It’s often cited as the most complex approach to maintenance, and for good reason. RCM is built on the idea that failure is not always linear. It requires careful analysis of each piece of equipment to identify all possible failure modes and determine the optimal time to carry out maintenance or inspections based on this data.

What is a P-F curve?

How do you read a P-F curve?

The “P” in a P-F curve refers to potential failure (when a piece of equipment could fail based on historical data, or the first point where we can detect that a failure could be occurring). To use an example, recording failures on a bearing could tell you that it typically fails after its temperature climbs above 60 degrees.

Conversely, the “F” refers to an asset’s functional failure (when the asset actually fails). Continuing with the same example, you know that you typically have about four days between when the bearing’s temperature passes 60 degrees (P) and when it fails (F). Therefore, you should be inspecting it within that interval (perhaps every two days). This will ensure that you catch a failure before it actually occurs. 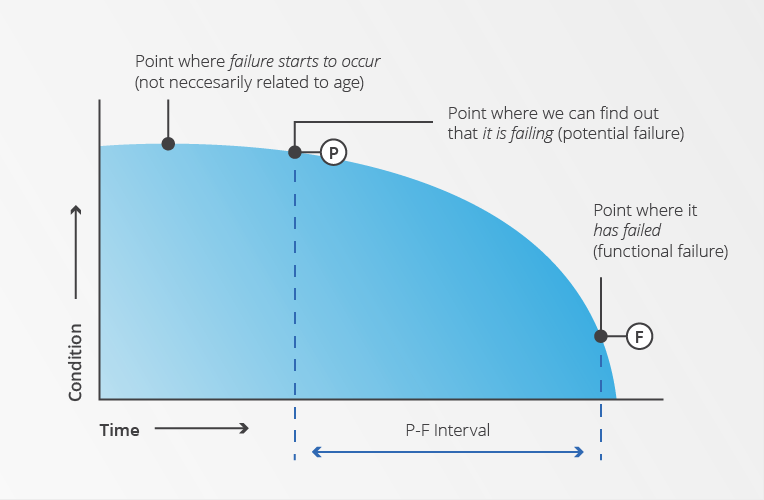 Staving off failure with maintenance is often not as simple as doing the same inspection at a set interval. The P-F curve recognizes the complexity of this task, which is why it works so well. The method assumes that failure is a fairly random and unpredictable event, caused by the culmination of many factors. If you can detect the signs of failure and identify the amount of time you have before a functional failure, you can focus on making the P-F interval as long as possible with less frequent, but more accurate inspections.

Get free resources on how to use failure codes to improve maintenance.

The P-F interval in maintenance

The bread and butter of the P-F curve is the P-F interval. This is the time between an asset’s potential failure and its functional predicted failure. Your inspection interval must be smaller than the P-F interval so you can catch a failure after it’s detectable, but before it actually occurs.

How to extend the P-F interval

Depending on the asset and its failure modes, there are a number of techniques that can be used to gauge an asset’s condition and delay failure. MaintWorld outlines them in their article titled, “Maximizing the P-F Interval Through Condition-Based Maintenance”:

As you can see, these are all tasks that require a great deal of training and expertise. This is one of the main reasons why RCM is considered complex.

How to use the P-F curve to improve maintenance

Maintenance teams rely on the P-F curve to monitor the deterioration of an asset. To do this in the most effective manner, historical data of the asset’s failure modes need to be analyzed. The P-F curve can be applied to the following maintenance processes:

By identifying failure modes and knowing when an asset is likely to fail, the necessary maintenance resources can be organized early. Workers can determine which maintenance tasks will need specialized expertise and negotiate agreements with third-party contractors in advance, if needed. They also have the time to source replacement parts without having to pay a surcharge for last-minute delivery. Overall, the P-F curve allows maintenance workers to schedule preventive maintenance tasks just before failure occurs. This avoids over-maintenance on the equipment, reduces maintenance costs, increases asset uptime, and extends its lifespan.

Historical data and knowledge about an asset help organizations assess the levels of increased risk as it moves through its lifecycle. Maintenance teams can tell how severe a risk is if they know when a potential failure and functional failure will occur. Identifying the risk severity of an asset on the P-F curve helps teams prioritize maintenance tasks.

The P-F curve helps determine when is the best time to replace an asset. Using this information, organizations are able to maximize and extend an asset’s functional life, replacing it just before it reaches functional failure. Indicators can be set up to alert maintenance personnel when failure is about to occur, or has already occurred, so that maintenance can be scheduled accordingly. Depending on the type of asset, indicators can precede failure, stem from failure that has already occurred, or even occur simultaneously as failure. The best way to figure out what type of indicator is the most appropriate is to perform a criticality assessment based on business goals.

The P-F curve enables organizations to find the best balance between different strategies. They can determine when predictive maintenance and condition monitoring approaches are required, and when corrective maintenance is the best option.

Factors that affect the P-F interval

There are many factors that can cause identified equipment failure modes within the P-F interval, such as:

How often a piece of equipment is operated will have an impact on the P-F interval. Is the asset being operated according to manufacturer’s guidelines? Other factors such as high start/stop cycles and periodic impact loading also can affect the PF Interval.

When replacing parts, it’s tempting to opt for cheaper replacements. But doing so risks causing a variation in the asset’s quality or components. This can shorten the P-F interval, be inconsistent with historical data that was originally used to inform decisions, and leave little time to respond to potential failure. There’s also the risk of recurring failures. It’s also important to consider how large and frequent load variations occur on a piece of equipment.